The first tip I can give you is pretty obvious, and it's to memorize the scale shape. That said, it's not about just going through and kind of memorizing the scale shape. It's more about memorizing it so that it's second nature. Basically so that you know the shape so well that you don't even have to think about it to play it. 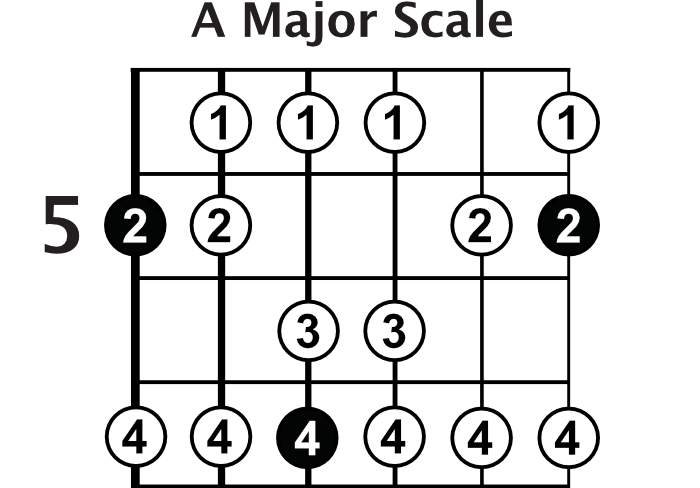 The next tip I have for you is to memorize the root note locations of the scale shape. These notes are essentially the home base of any scale shape, so it's important to know where they are in any shape you learn. For the A major scale shape, they are the notes that are shaded in.

When you're playing a scale, certain notes will be the same ones that are included in the corresponding chord. We call these notes "chord tones". To really get an idea of how this works, it helps to know the chord shape within the scale. In an A major scale, we would emphasize the A, E, and C#. In the example below, you can see where these notes are in the scale.

An interval is simply the space between two notes. Allowing for different spaces between notes in a scale is how we create melodies. Here's an exercise you can use to start recognizing the sound of each interval between the different notes from within a scale.

A sequence is just a pattern of repeated notes throughout a scale. We'll be taking a look at one commonly used one. Sequences are commonly used when players are playing quickly. The scale sequence in this lesson is a simple three note sequence.

#6 Sing What You Play

Singing what you play is a great way to start breaking down the walls between what you're doing physically with your guitar, and what you're trying to do mentally. Start off by singing along to a scale, and gradually try more challenging sequences or melodies. Eventually, you'll be able to sing what you want to play before you even play it.

There are a number of ways to start practicing your scales along to music. You can play along to a jam track, jam with a couple of friends, or even start writing your own songs and coming up with your own solos and riffs. To help with this, we've included a jam track in the key of A major that you can practice all these exercises along to. You can download it by clicking on the link beneath the video at the top of the page.