In this lesson we are going to learn how to make a major 9 chord. Major 9 chords are used a lot in jazz, swing, and blues music. They are nice sounding chords that can give your playing some more variety and texture. If you have not gone through the lessons on Major Guitar Chords and Major 7th Guitar Chords, I suggest that you watch them and make sure that you understand these lessons before continuing. This lesson will be in the key of C major and we have provided you with the chord diagram for the major 9 chord shape that we will be learning. 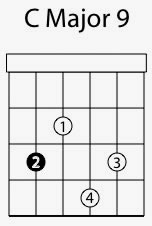 You can also look at make a major 9 chord as just adding a note to a major 7th chord that is a 9th away from the root of the chord. Fore example we are in the key of C and we are building a C major 9. Start counting up the C major scale, with C being one, all the way up to the ninth note. That would look like this: 1C, 2D, 3E, 4F, 5G, 6A, 7B, 8C, 9D. Notice that when you get to C again you just count it as eight and then count the D as nine. D is the 9th of C so just add a D note to the C major 7th chord.

You might notice that we left out the 5th of the chord, the G note. There is a good reason for this. Often in jazz, or other kinds of music where there are a lot of things going on harmonically, you can leave out the 5th or root of a chord and it will sound just as good or better than it did if you included it. Thick chords like this can easily get muddy, especially if you have a keyboard player and a bass player that are already playing the 5th or root of the chord.

This shape is movable so play it up and down the fretboard until you are comfortable with it. Come up with your own major 9 chord voicings and start using them in your playing. Try substituting some major 9 chords for some major 7 chords is music that you are already playing.