In guitar lesson you will be learning two variations of an exercise that uses an A major pentatonic scale to help you work on your inside and outside of the string picking. Check out the A major pentatonic scale diagram. You should be pretty familiar with this shape before starting to work on these exercises. There are two versions of this exercise. The one that starts with an upstroke will focus on outside of the string picking and the one that starts with a downstroke will focus on inside of the string picking. We have given you the TAB for each exercise. Make sure to pay attention the up and downstroke indicators at the bottom of each line. 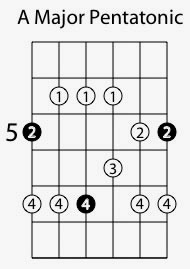 It may take some time for you to build up the coordination in your hands necessary to play this exercise. Work on it slowly and make sure that you are following the TAB exactly. You should only have one string ringing out at any given time. Once you get this exercise down starting with an upstroke you should try starting it with a downstroke. This changes the feel for your picking hand quite dramatically.