Welcome to the second video of the Blues Guitar Quick-Start Series. In this lesson, we’re going to cover something very foundational to the blues, the standard 12-bar blues progression. We’re going to keep things simple by using only power chords to focus on getting this progression down and engrained in your brain.

Let’s talk about keys when it comes to the blues. Often if you see a piece of blues music written out, you won’t see a key signature noted on it. It might simply say what key the song is written in, like the key of E blues or the key of A blues. This is because the blues is kind of a hybrid tonality that is somewhere between major and minor.

Let’s talk about blues rhythm. All of the jam tracks I have for you in this series are 4/4 time, which means you have 4 pulses, or 4 beats, per measure. Many blues songs are in 4/4 time, that’s why we’re sticking with 4/4 time in these lessons. The standard 12-bar blues progression is a set progression of chords throughout 12 measures of music.

Blues music usually has a shuffle feel to it, and you’ll have to get this down to get the feel of blues music right. If you have eighth notes in 4/4 time, they’re usually straight and evenly spaced, like I demonstrate in the video. A shuffle or swing feel is going to have a long note followed by a short note, which is easier to understand once you’ve seen me demonstrate it in the video. It gives the music more of a skipping or rolling feel.

Looking at a swing feel more technically, you can think of it as three triplets for each beat but you’re removing the middle triplet out of each beat. You can see this played in the video as well, but don’t worry too much about the technical aspect of it now. You’re probably heard this in lots of blues songs, so just work on getting the swing feel down.

Let’s start working on the standard 12-bar blues progression. As I mentioned earlier, it’s a set progression of chords through 12 bars of music. Memorize this forwards and backwards so that you have it down cold.

This probably doesn’t mean a lot to you yet without hearing it and playing it, but you’ll need to memorize this progression. What we’ll do now is apply this using power chords, so let’s take a look at them.

For our 1 chord, we’ll be using an E power chord. Place your index finger on the second fret of the A string, and strum just the sixth and fifth strings. 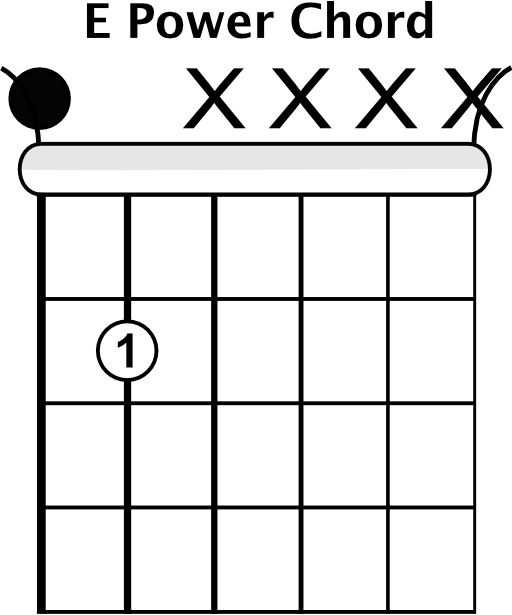 For the 4 chord, we’ll use an A power chord. This will be the same shape as the E, with your index finger on the second fret of the D string, and strum just the fifth and fourth strings. 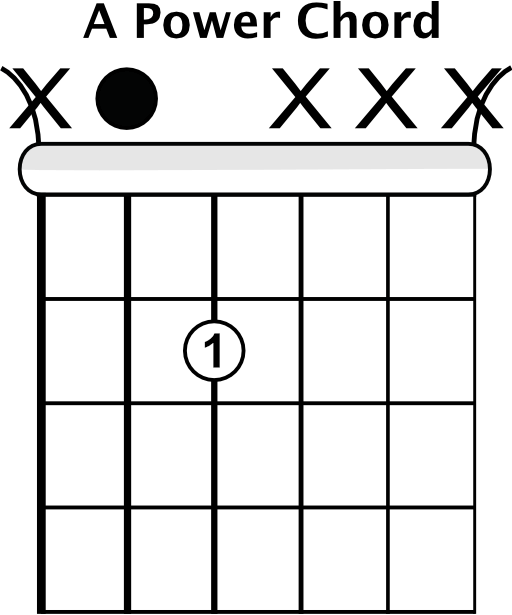 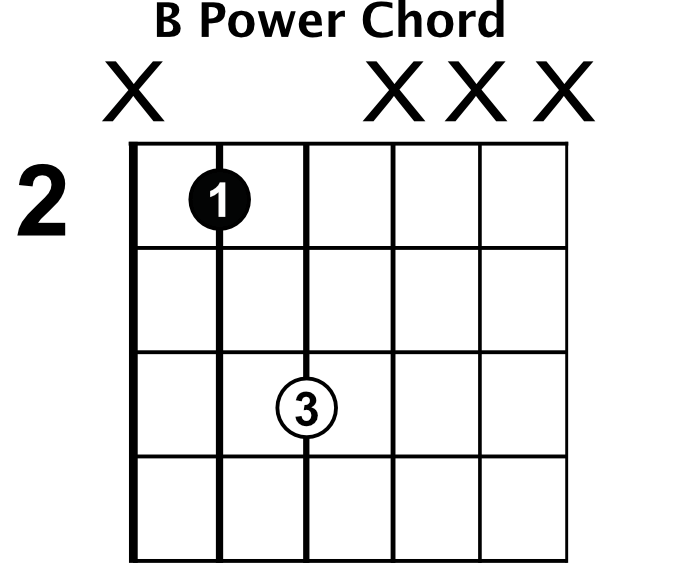 Walk yourself through this and begin memorizing this progression. As you play, remember that for each power chord, you should only be hitting two specific strings. You can play whole notes like I did first in the video, or you can play eighth notes with a shuffle rhythm. You may have to work on your aim with your strumming hand to be able to hit just the strings you need. When I’m playing my A and B power chords, I’ll usually mute the low E string with the palm of my strumming hand to make sure it doesn’t ring out if I accidentally hit it.

Take a look at the video at this point to see me play the 12-bar blues progression with eighth notes using a swing rhythm and power chords in the key of E. After watching, go through this lesson as much as you need to in order to get really comfortable with this progression.

Once you’re comfortable with it, pull up the jam tracks for this lesson. There’s one track at 70 beats per minute and another at 100 beats per minute, so you can choose the one that matches your current skill level. For now, you can keep the strumming simple if you want by playing all whole notes, and then when you’re ready, you can move up to the swung eighth notes like I played in the example.